Some Exciting New Products for Ultrarunning

(They work for just road running too)
Since I purchased my first pair of Trail Shoes back in 2005 or ’06 I have seen a lot of changes in the sport of Trail Running and ultra running. I actually had to drive to Chattanooga to find a store that had a selection of trail shoes and a knowledgeable sales person to help choose that first pair. For fuels, there were GUs and Gels and Hammer had energy products designed for bike racing that worked OK for trail racing, to a point. Electrolytes were pretty much limited to capsules you swallowed every hour or so during a run or race. All this worked OK, Usually!

If you needed a hydration pack, you purchased a small hiking pack from an outdoors store. Things like water bottle holders and jackets you purchased from the local road running store or hiking store. Back then, I actually make peanut butter and jelly sandwiches to take on long runs and I threw in a few cookies. (Well, I still take cookies.)

As I mentioned, many of these products were designed for endurance biking events, especially Hammer Products and there is one big difference between a 5 hour bike race and a 5 hour 50K run. A bike rider’s upper body stays fairly stationary on the bike during a ride. The legs do almost all of the moving. In a run, your upper body is bouncing up and down with every single step. When your body bounces up and down, so does your stomach. If what you consume during the event is not absorbed almost as fast as you take it in, all that stuff starts sloshing around and your stomach rebels. You will likely spend the rest of your race battling nausea.

The electrolyte caps work great as long as you remember to take them on schedule. In reality (reality being the middle of a very long race, 10 hours, 20 hours, 30 hours, etc…) you will likely encounter two problems. First, after hours of running your mind just doesn’t function at peak performance. If a runner is using electrolytes, (salt caps,) and plans to take one cap per hour every hour, you will likely have no problem for 4 or 5 hours. But, as the day or night wears on it is really easy to get off schedule. Is simply becomes difficult just to keep up with the time. I have looked at my watch and noted it was 10 minutes until I need to take a salt cap. The next time I was aware of looking at my watch it was 10 minutes past when I should have taken the tablet and I had no idea if I actually took the capsule or not. By hour 22, I would be doing good to remember what I was supposed to do on the hour, every hour.

The second problem many people have with electrolyte caps is that they become very difficult to swallow late in a race. Most of us have no problem early in a race swallowing capsules. Throw one on your tongue and take a big drink of water and it’s gone. Now, fast forward 15 or 20 hours into a race. If you do remember that you need to take a salt cap, you put it on your tongue, take a big drink of water and capsule goes nowhere or worse, it causes you to gag and you spit it out. Once I get to the “can’t swallow a cap” stage, that’s it for the “salt caps,” I have to get electrolytes some other way or not at all. Without electrolytes your body does not absorb water very quickly so the water you drink starts sloshing around in your stomach. “Nausea!”

Several years ago, NUUN came up with a tablet you just drop into 16 oz. of water and your electrolyte mix is perfect. As you drink your water/NUUN tablet mix, you get exactly the right amount of electrolytes. This sounds simple and works great in training runs. (By the way, training runs, especially those very long training runs, are where you sort out your ultrarunning plans. It’s where you find out what works and what doesn’t, what you like or don’t like and what you can eat and what you cannot eat. Then you go to an ultra and realize what worked great in training runs really doesn’t work in an ultra. On to plan “X” or “Y.”) For me, the NUUN tablets worked great in training runs and short races. Then I tried them at the Tahoe Rim Trail 100 in July 2011. Mid-afternoon, 9 or 10 hours into the race, I started feeling sick at my stomach. I realized the ratio of NUUN mix was way too strong. It tasted awful. I poured the mix out before the next aid station and started over with the correct ratio.

Sometime around 9 or 10 PM, 15 or 16 hours into the race, I stared feeling sick again. This time my mind was somewhat dysfunctional and I couldn’t figure out what was wrong. I ended up having to walk most of the night. Just before arriving at the Bull Wheel Aid Station on top of Diamond Hill Ski Resort about mile 71 I finally figured out the problem. Once again the NUUN tablet ration was way off. I had walked for 6 or 7 hours before I realized why I felt so bad.

The reason I was having trouble keeping the ratio correct was because I was wearing a hydration pack with a water bladder in the pack. It was difficult to determine exactly how much water was adding at the aid stations. Basically I was just guessing. At night, it’s even harder to judge the amount of water added. Each time I added water I would throw in the correct amount of additional NUUN tablets, per my “guess.” With each aid station stop the mixture became a little stronger. The change was so subtle I never noticed it until the water became undrinkable. Too much salt is just a bad as not enough salt. They both make you sick. I dumped the water out of my Hydration Pack and filled it with straight water and took salt tablets the rest of the race with no problems what so ever. 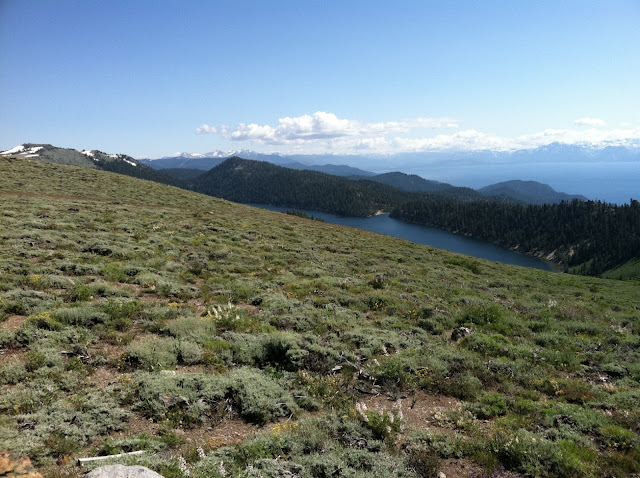 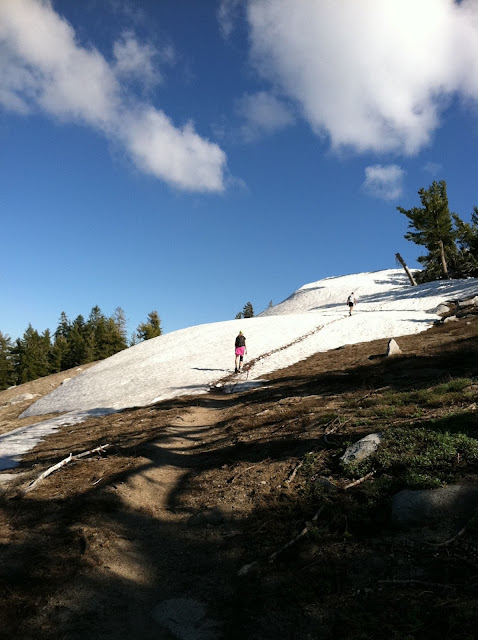 Just one of many snow fields along the crest of the Tahoe Rim Trail.

I don’t like to waste water at aid stations because in all remote aid stations water has to be carried in, or in some cases filtered from streams or collected from springs. In some extreme cases, such as Kroger’s Canteen in Hardrock, snow must be melted and sometimes carried up the mountain several miles. At these aid situations, water is a valuable commodity not to be wasted. To use NUUN Tablets I would have to find a way of accurately measuring the water added. It was simpler just to carry salt caps and remember to take them.

Until about 6 months ago I continued to use nothing but Electrolyte caps and an energy drink mix. Then, in the Pinhoti 100 this year, by sunset, I was no longer able to swallow electrolyte capsules and things went downhill quickly. I decided it was time to find something new.

Several people had told me about a new product called Tailwind. It is a drink mix that combines carbohydrates, electrolytes, and since you mix it in water, hydration all in one product. I decided to give it a try during my training runs for the Lookout Mountain 50 Mile in December. The stuff worked great. I ran Lookout Mountain consuming nothing but Tailwind and finished over an hour faster than the previous year with absolutely no stomach issues and I felt strong to the end. I have used Tailwind in two other trail races this year, Mountain Mist 50K and the Grand Viduta Stage Race, (a three day race) plus the Mercedes Marathon, also this year with great results. Yes, I carry a water bottle even in road races. I only had to slow down for water at aid stations three or four times in the entire Mercedes Marathon. I like to drink a little when I am thirsty, not just when I am passing through an aid station.

Tailwind is available in large, multi-serving packs on the left and in individual serving sizes, on the right. The small size is a great way to find out what flavors you like. Read more about Tailwind at Tailwind.com. Give it a try, even in a road race.

There is still the issue of the mixing the correct water/powder ratio. Running with hand held water bottles or the correct hydration pack can solve that problem. With the ever increasing popularity of ultrarunning, more and more companies are focusing on new products for Ultra runners. Two of those new products are shown below. On the left is one of several new hydration packs introduced by Salomon over the last couple of years. On the right is one of the new packs produced by Ultimate Direction. These packs have two bottle holders on the front and these particular packs have room of a hydration bladder in the back compartment. That extra water could come in handy for very long training runs or if you are running a race with long stretches between aid stations, especially if it will be hot. I discarded the small, blue collapsible Salomon bottles and use my Ultimate Direction 20 oz. bottles for both packs. It’s easy to mix Tailwind in a bottle and keep the ratio correct. These packs are both light and comfortable and the Salomon pack even comes with a “heat shield” to keep the water from making you cold in cold weather or to keep you from making the water hot in hot weather. (That’s a smart heat shield!) 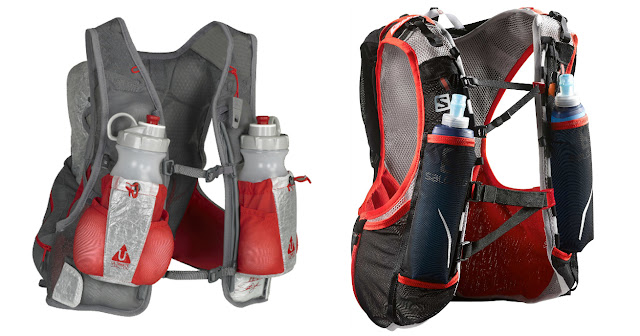 Most of the techniques I use and equipment I run with was suggested by other ultra runners. Unfortunately, trial and error is still necessary. My closet contains 6 pair of trail shoes, (two of which I like and wear), eight hydration belts or packs, numerous headlamps, flashlights, jackets, socks, gaiters, etc, that I don't like or don't work like I hoped. Maybe this blog can help you eliminate some of the errors. I hope you enjoy it and learn from my mistakes. I have started a website listing all of the posts form the blog. The posts are grouped according to subject (equipment, training, Hydration, etc) for easier access. It will be a work-in-process for a while. Check it out at Run Your First Ultra.

A Little About Me

David
I was an average miler in high school who never stopped running. At the age of 30 I started road racing. After 35 years of running countless 5K and 10Ks and something over 30 marathons. I never kept records of how many races I ran but I was totally burned out on road running so I started riding bikes. Since I was running and biking, I decided to figure out how to swim more than 25 yards and enter a triathlons. That was actually fun. Then in 2006 my wife, Marye Jo, and I ran the Imogene (Ouray to Telluride) Pass Run in Colorado and I was forever hooked on trail running. Since then I have entered ninen 100 mile races and finished six including The Leadville 100 in 2009, The Tahoe Rim Trail 100 in 2011, the and the Gringstone 100 in 2012 . After 5 years I get in the Hardrock 100 in July of 2014 but was only able to complete 71 miles but the experience was worth all the effort. "Next Time!"

Continued running just because I liked to until 1978 when I moved to Mobile, Alabama and started road racing.